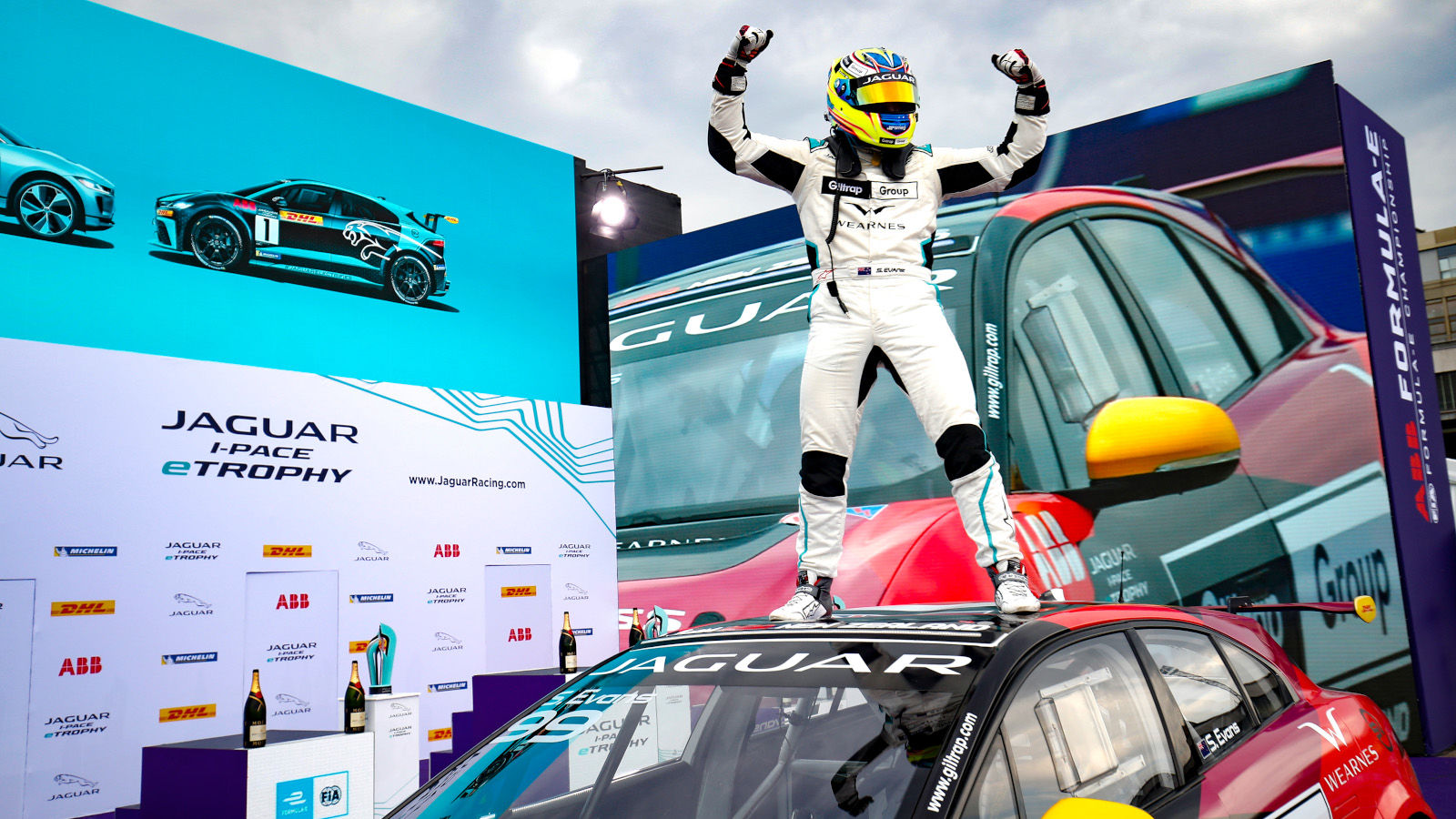 The Jaguar I-PACE eTROPHY series concluded today in Berlin with Simon Evans being crowned the season two champion. Team Asia New Zealand driver, Evans, kept a cool head to finish P2 ahead of his title rival Sérgio Jimenez who was leading the series until the last race. ZEG iCarros Jaguar Brazil driver Cacá Bueno won the final round of the ten-race all-electric series with a lights-to-flag victory.

Kiwi driver, Evans, has won four races this season and continuous visits to the podium put him one step ahead of his Brazilian rivals. He only had to finish ahead of Sérgio to take the title and he drove his Jaguar I-PACE faultlessly throughout the seven Berlin races at the Tempelhof airfield.

First lap dramas saw Jaguar China Racing driver, Nick Foster, try to overtake Jimenez into turn one but the Brazilian closed the door which put the Australian down the order. Alice Powell, in her Jaguar ran racing Team Germany I-PACE, finished just off the podium in P4 to secure fourth in the series. Gregory Segers, the French teenager, finished just behind his team-mate Foster and ahead of Team Yokohama Challenge racer, Takuma Aoki.
PRO-AM challenger, Paul Spooner’s, race was cut short after a coming together with VIP driver Sven Förster which lead to his retirement with a puncture. Adalberto Baptista secured the runners-up spot with a spirited win – the Brazilian’s first of the season.

The world’s first all-electric touring car series bows out after seven electrifying ‘Lockdown Showdown’ races in Berlin. The series has showcased the award-winning Jaguar I-PACE in some of the world’s greatest cities – New York, Monaco, Mexico City, Hong Kong, Paris, Rome and Berlin. It has supported a diverse grid of men and women from all around the world and made history along the way. Jaguar Racing’s journey continues in ABB FIA Formula E as the series receives FIA World Championship status from next season which starts on 16 January 2021 in Santiago, Chile.

“Unreal experience - I’m incredibly proud to be the Jaguar I-PACE eTROPHY season two champion! The I-PACE came through for me again and it was like a rocket! It’s been a tough nine days, with seven races but it’s been epic at the same time. Thanks to the Giltrap family and Group, Access Group and Wearnes Group, we did it. We rolled with the same set-up, with what we know and it worked, I’m so happy for Team Asia New Zealand. Big thanks to Robin Colgan and the guys in the Asia Pacific office and for putting me in the seat – Giltrap Group, Access Group and Wearnes Group and the opportunity to do this. I’m over the moon!”

“My set-up wasn’t as good as I would have liked it to be over the last few days. I did everything I could but my car hasn’t had the pace I needed since race six - it doesn’t fit with the set-up. It’s been amazing to be part of the Jaguar I-PACE eTROPHY series and helping to encourage the electrification of motorsport. I am happy but it’s a shame I couldn’t be a champion for the second time.”

“I tried to do my best to win this race and together help the team – I tried to expose Evans to help Sérgio but fairly. I’m so happy the car was good and to be part of a fantastic season for a second year in a row. It was a shame I missed two races in Saudi Arabia as I think I would have been part of the Evans and Jimenez battle but I am happy. We’ve made history with the first all-electric touring car series and it’s great to have been a part of it!”
Mark Turner, Jaguar I-PACE eTROPHY Series Manager:

“What a great way to finish – congratulations to our season two champion Simon Evans. I want to pay tribute to all the drivers who have taken part in the Jaguar I-PACE eTROPHY over the two seasons. I also want to thank all the engineers, mechanics, commercial partners and unsung heroes who have delivered a series we are all immensely proud of. Without exception everyone has put a little bit of themselves into this series and although it is a sad day to draw the curtain on eTROPHY we are honoured to have been a part of it. Thanks to Formula E for having the vision to host this history-making official support series.

“We look back and smile at what we have achieved in this series. Giving opportunities to drivers from diverse backgrounds, cultures and nations. Whether it was Reema Jufalli making a little bit of history as the first woman to race at home in Saudi Arabia or Takuma Aoki, the first driver who is paralysed from the waist down to race an electric car – we have truly broken new ground. We were a world’s first and those who follow will always be second.”

“Every great series should come down to the wire and that’s what we’ve seen today – the two protagonists, Simon and Sérgio, fought right up to the end in a tense and exciting finale. What a day to end on and what a final race! In two years we’ve created an incredible series that has not only delivered incredible close racing, but at the heart we’ve done it with a production-battery electric car, the first of its kind in the history of our sport and industry. This is the future of the sport and Jaguar is incredibly proud of all the Jaguar Racing team, entrants, drivers and partners who made it possible and created history together.”

Exclusively featuring Jaguar I-PACE eTROPHY racecars, the all-electric series gives drivers of the future and established racers a chance to showcase their talent, competing on the world stage in zero-emissions motorsport. After making history in the inaugural season, the groundbreaking series will see up to 20 identical Jaguar I-PACE battery electric racecars on the grid in 10 races, across eight global cities.

New for season two is the introduction of ATTACK MODE providing an extra 20% in torque and power for a specified duration (defined at race) providing increased race strategy and additional overtaking opportunities.